Side Effects of Cipro
Tendonitis, Tendon Degeneration, and Pain


You may want to be aware of the Side Effects of Cipro if you have been or are considering taking the Ciprofloxacin antibiotic for any reason.

If you have developed Tendonitis, Tendon pain, or similar symptoms 'for no reason', a class of antibiotics that include Cipro could be the cause.

Lawsuits and legal claims have sprung up, and rightfully so, as people taking antibiotics for various reasons have suddenly been struck by severe tendon pain and tendon degeneration.

If you have tendonitis in a single or various locations in the body and/or debilitating pain, Cipro could be the cause.

Side Effects of Cipro
What is Cipro?

Cipro, the common name for Ciprofloxacin, is in a group of medications known as fluoroquinolone or Quinolone Antibiotics.

Called "quinolones" for short, this group includes Levaquin, Cipro and Avelox, which are all known to cause tendon rupture and degeneration damage.

Made by Bayer AG, Ciprofloxacin is sold under various names including Cipro, Ciproxin, Ciprofloxin, Ciprobay, and Cipro XR.

Cipro has received a 'black box' warning from the FDA warning of the dangers of tendon damage from Cipro use.

Isn't it interesting that raw milk is nearly illegal to produce and buy, but a known, dangerous products like Cipro and Levaquin are still allowed to be sold, marketed, and prescribed? Crazy.

Is Cipro a controlled substance? You do need a prescription to legally acquire Cipro. The official stance is that the benefits of the drug outweigh the risks. In my opinion, it's not controlled enough.

The side effects of Cipro are serious enough and prevalent enough that the FDA should crack down on it.

Side Effects of Cipro
What Is Cipro Used For?

These powerful drugs are used as anti-biotics for, among other things, Prostatitis, E-Coli, and various forms of Staph infection.

World travellers often carry Cipro to use in case of 'Montezuma's Revenge' from eating new food/water (bugs!) in places their gut isn't used to

I'm not going to list everything Ciprofloxin is used for. It's a long list and covers most everything, including:

And yes, you can get tendon rupture and Cipro Tendonitis no matter what ailment you were prescribed Cipro for and no matter which quinolone you took.

Wouldn't that suck to have your doctor prescribe you an antibiotic for a uti, take that antibiotic, and weeks later have possibly permanent debilitating pain from Cipro tendon rupture??

Interesting fact: Taking corticosteroids while taking Cipro increases the likelihood of getting 'Tendonitis' and Tendon Rupture.

Interesting fact: Cipro is touted as a counter to Anthrax, though these claims have never been tested on humans.  Much of the 'Gulf War Syndrome' is likely an outcome of the military being given Cipro as a 'prophylactic'.

Side Effects of Cipro
How Does Cipro Work?

Ciprofloxin works by interfering with two important bacterial enzymes (topoisomerase IV and DNA gyrase). These enzymes are necessary for bacteria to be able to copy and repair DNA (important steps required in order for bacteria to multiply).

Whether delivered in pill form, by injection, or by the intravenous route, Cipro targets certain kinds of bacteria and disrupts their ability to replicate.

Cipro Side Effects, specifically tendon tissue related side effects, may or may not have anything to do with that enzyme targeting process. Doctors and researches don't seem to know how exactly Cipro damages tendon tissue.

The Side Effects of Cipro

Let's get past the usual stuff that most all prescription drugs have as side effects.

Specifically, one major side effect of Ciprofloxin is tendon rupture, degeneration, damage, and the symptoms of Tendonitis.

"Achilles and other tendon ruptures requiring surgical repair, resulting in prolonged disability can occur from quinolone use. "

Rupture of a tendon and/or Cipro Tendonitis can happen within days of taking the medication.

Side Effects of Cipro
Cipro Tendonitis

See:  What Is Tendonitis?

Growing knowledge of tendonitis is pointing to a particular issue of 'Tendonosis', which basically means that due to lack of blood circulation and nutrition delivery, the outer layers of a tendon begin to die and deteriorate.

Then the dying areas get pulled apart due to the stresses placed on the tendon from muscle contraction.

Somehow, Ciprofloxacin, Levaquin, and various other quinolones cause targeted degeneration of the tendon.

This can happen quickly, as in days or in a week or two. Or in the case of extended Cipro use, it can slowly do damage over time. It just depends on the person, their body's reaction to Ciprofloxin, and the dose they take.

Depending on how much Cipro a person takes, and how their body reacts to it, and a host of other factors that haven't yet been identified, a person on Ciprofloxin may or may not experience tendon damage.

Cipro Side Effects are a serious consideration if you are thinking of taking that particular antibiotic, no matter how young or healthy you are.

In some unknown way, quinolones attack the tendon in a way that is worse than just 'causing damage'. It's not like you just need to heal a rip and tear injury.

It seems to degrade the tendon in such a way that the usual way the body heals just doesn't, or can't, work.

The Side Effects of Cipro are:

What To Do If You Have Tendon Damage From Cipro

Side Effects of Cipro - What to do about them

The Cipro antibiotic has the potential to really mess up your body/tendon tissue with lasting structural deterioration. Statistically, the side effects of Cipro are not as bad as Levaquin Side Effects, but still, when it's a problem, it's a major problem.

Obviously, stopping the use of Cipro is a mandatory first step. Stop the source of the damage, and then try to counter and repair Levaquin side effects issues.

1. Increase your protein intake. You want to get as much building blocks to the tendon. Start on Bone Broth as the best Tendon Supplements to get your fill of collagen and mineral nutrients that we're all lacking anyway, and that can help our bodies heal tendon damage.

There is a good chance that the side effects of Cipro linger because we get damage, and then don't have good enough nutrition to sufficiently repair the damage. If you think your nutrition is good, it's very safe to say that it can get better.

More protein is not a fix, but it is a factor your body absolutely needs.

2. Do the Ice Massage from the How To Reduce Inflammation. page.

This will get waste product out and new blood and nutrition in. Alternate heat and cold for a bigger circulatory effect.

If you get damage, the body produces Inflammation. Inflammation is one of the serious side effects of Cipro.

Icing adequately can lower pain levels, but it's not a fix for the CAUSE of your ongoing pain and problem.

3. Jump on the legal bandwagon.

I'm not a big fan of lawsuits, but this is one of those cases where I'm all for it. It's just not right to take a 'medicine' and end up severely injured. The FDA and big pharma know of this danger and don't mind as long as millions more people purchase their drug.

4. Get 'The Levaquin Tendonitis Solution'

5. Short of getting the Levaquin Tendonitis Solution ebook, get on the free 7 Day Levaquin (same thing as Cipro) Tendonitis E-Course, see below:

Return to the top of this Side Effects of Cipro page.

Go to the TendonitisExpert.com homepage. 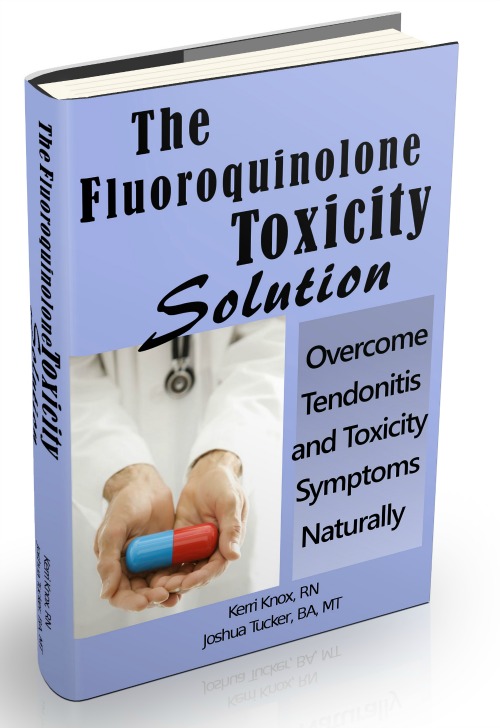 This site is for information and education purposes only. It is not intended to diagnose or prescribe for any medical condition. Your health and well-being depends on your willingness to learn and
apply effective methods. By Joshua Tucker Copyright ©2008-2022 www.TendonitisExpert.com All Rights Reserved. Unauthorized use prohibited. Privacy Policy Terms And Conditions Disclaimer